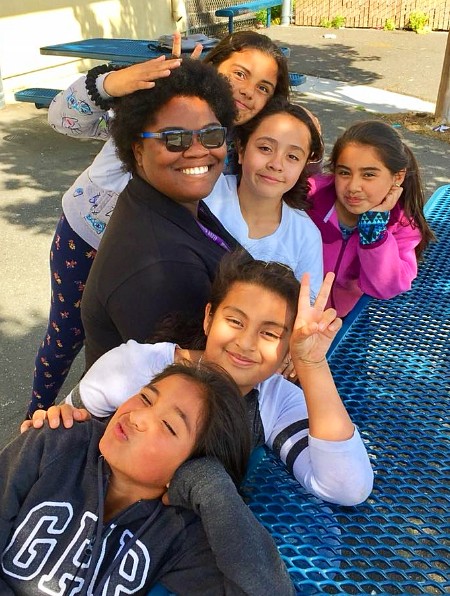 Meet Alicia Ellington, 26, of Pittsburg, CA. She is an exemplary AmeriCorps National Member, currently finishing up her second year of service with Safe Passages at Community United Elementary School (CUES) in Oakland. Her cohort consists of eighteen 4th and 5th-grade girls who adore her.

Earlier this year, Alicia noticed that all of these 10 and 11-year-old girls were experts on their phones. She says, “They are discouraged from using their phones at school, and I understand that because I know it’s distracting – but I also wanted them to know that what they’re doing on their phones and with technology is actually a marketable skill. It’s a different language that they didn’t even know they were fluent in. I want them to be empowered to own that knowledge and pursue it.”

So Alicia decided to channel her students’ interest in technology and is teaching them how to code as the enrichment aspect of the after school program this year.

Since CUES does not have a computer lab or computer teacher to teach the students Microsoft Office Suite or other basic programs, Alicia took the initiative to research available curriculum and programs. She found a great free program called Coding With Kids. Alicia explains why closing the digital divide for her students is so important: “I didn’t want them to be at a disadvantage just because their school doesn’t have the same resources as other schools. As members of the Tech Generation, my girls need to know these things!”

Alicia set up an account for each of her students and had them take an initial aptitude test to gauge their level of knowledge/skill. When asked about the girls’ reaction to the curriculum, Alicia shares that “some of them were frustrated at first, while others caught on really quickly.” Carla, a fifth-grader, says that her favorite aspect of coding is “how all of the small steps come together and talk to each other in order to make something bigger. It’s cool to see how all the pieces fit together to make something new.”

To date, Alicia’s students have covered what it means to code, algorithms, debugging, the basics of app design, and so much more. Alicia also wants her students to see that coding can be creative in the traditional sense, too. So, as a final project, each student will design their own Google Layout – which they are very excited about! 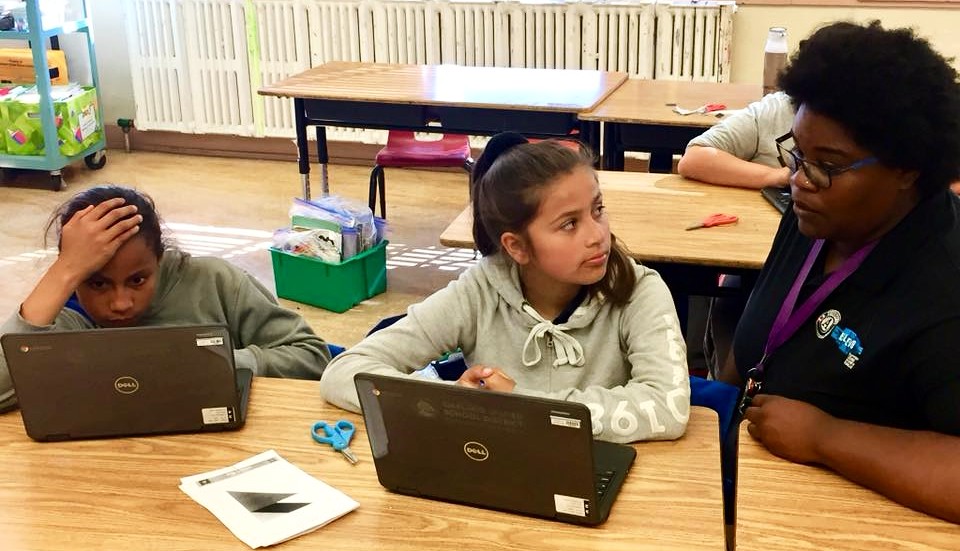 Alicia also talks to the girls about the importance of women in Tech and other STEM fields. She adds, “Girls and women are just as able to learn, master, and advance these fields as anyone else. I want my girls to know that they can accomplish whatever they put their minds to. I want them to know they can do anything, and that nothing is off-limits for them just because it has historically been ‘a guy thing.’ That’s in the past, and we’re looking to the future.”

Alicia explains that her AmeriCorps experience has given her the drive to continue pursuing a career in coding. She explains, “I grew up loving video games as a kid – the story aspect of them, which is why I went to school for theater and ended up graduated from CSULA with a degree in Theater and Stage Management.” But as time went on – especially this past year working on coding with her students in AmeriCorps – Alicia realized that she wanted to “do more” with her love of tech. So she decided to enroll in Full Sail University, an accredited online college, to learn the program language Unity and receive her Bachelor of Science in Game Design. She hopes to graduate in January 2019, and directly afterward plans to attend Hackbright Academy For Women to learn another coding language called Python, to make herself as competitive an applicant as possible. Her ultimate goal is to relocate to San Francisco or San Rafael to get into the gaming industry.

She hopes to one day “create an educational coding software that’s designed specifically for young girls because I’ve seen that a lot of young girls do love learning about tech and coding. They just need the opportunity!” 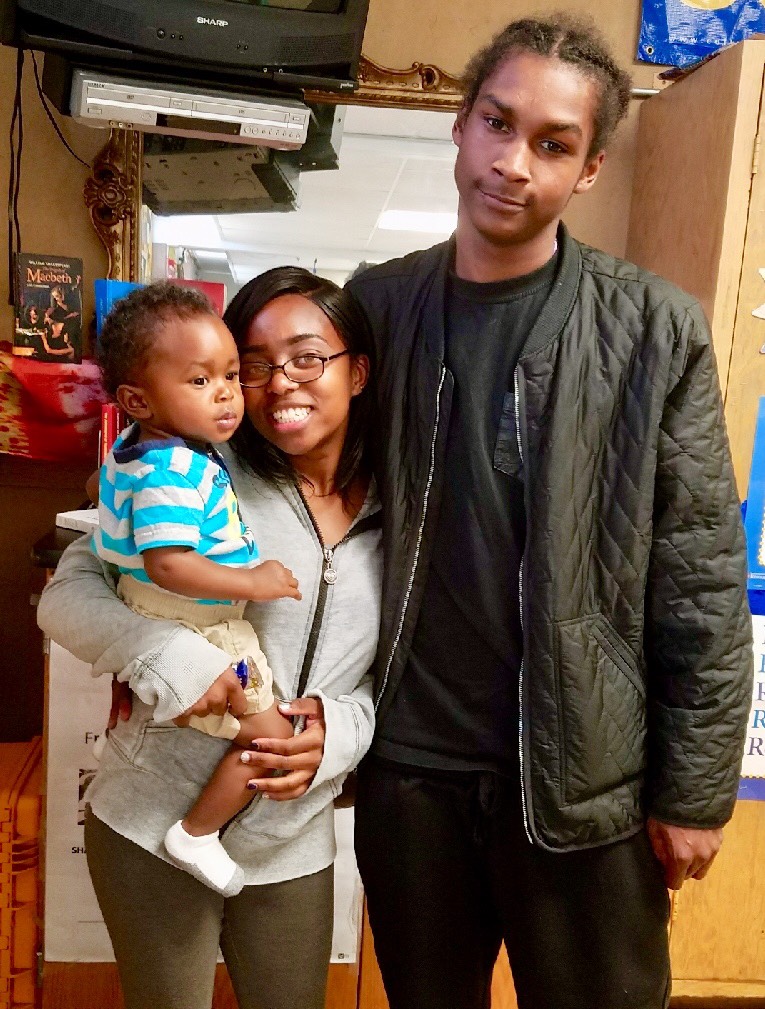 Rita McKeon, Safe Passages’ AmeriCorps VISTA Volunteer and Family Resource Center (FRC) Coordinator at Ralph Bunche, is highly impressed with Nia’s engagement in school activities and with her young family. Rita shares, “Nia is so tenacious, and makes succeeding her top priority to make sure her son does not have to struggle as she has.” She continues, saying, “I absolutely love Nia, and am so proud of her not only for being an amazing mother but for being an amazing student.”

While pregnant, Nia attended school every day up until she began the independent study at the start of her ninth month of pregnancy. Nia recalls, “I was on bed rest the entire last month of my pregnancy, so independent study was my only option. I never missed an assignment, and I am really proud to have maintained my spot on the Honor Roll.”

Rita and the FRC have connected Nia and her family to many trusted and affordable local programs, including services at the Oakland Public Library, the Oakland Tech Exchange, Bay Area Legal Aid, and the East Bay Community Law Center; in addition to groceries provided by the food pantry and donations of baby clothes and diapers. Nia adds, “I love Ms. Rita. I’ve received so much support from her and the FRC here at Bunche. She’s been especially helpful when it comes to housing information, and is trying to help me find Section 8 housing opportunities.”

Of Motherhood, Nia says, “it’s a constant balancing act between being a full-time mom and a full-time student.” She adds that she truly loves being a mom – “It’s like reliving childhood! And having a baby inspires us to get out and do so many activities because we want our son to experience everything.” Rashad Junior’s father is also a very involved parent and supportive partner and takes care of their son during the day so that Nia can attend school until she graduates on June 5th.

Nia’s immediate post-graduation goal is to find childcare for the baby and focus on obtaining employment. Rashad plans to return to school to receive his high school degree. Nia shares that “Rashad is excited to go back to school, but will miss seeing his son all day every day. He’s a very protective dad!”

In terms of her future and longer-term goals, Nia is starting a cosmetology course at Laney College in August, and is “really excited!”

When asked if she has any advice to offer other young mothers, Nia says: “Never give up, and always have a backup plan. Reach out to people in your family and the community for help – there are always services available to help you out; you just have to learn where to look and be willing to access them.”

Over the last two decades, Safe Passages has fought to increase the accessibility of mental health services and to innovate new culturally responsive approaches to improving mental health in the communities we serve. And Safe Passages has been an implementer of the California Reducing Disparities Project (CRDP) – a program of the California State Department of Public Health’s Office of Health Equity – since August 2016.

The vision for the project is a California in which all individuals, regardless of race, ethnicity, sexual orientation or gender identity, receive quality mental health prevention and treatment services delivered in a culturally and linguistically competent manner. The CRDP focuses on achieving mental health equity for five population groups who are the most adversely affected by disparities: African American, Asian and Pacific Islander, Latino, LGBTQ, and Native American.

The Department of Public Health seeks to reduce mental health disparities among unserved, underserved and inappropriately served populations in the state. The success of the interventions will then be measured and evaluated through pre and post surveys. Participating youth will be asked various questions related to the three components of health mentioned above so that Safe Passages staff members can gage their mental health state pre-intervention. The same participants will also be surveyed after they have received the five interventions and have completed the program.

As we continue our pursuit of social justice and actively work toward better outcomes for the youth and families in our communities, we vow to always maintain a steady focus on improving mental health practices and access to effective mental health services.

May is Mental Health Awareness Month. For those of us who work in human services, mental health has long been considered as critical to individual and collective success as physical health. We live in a world that challenges us everyday.  We strive to overcome these challenges and thrive. However, our often-hostile environments create an abundance of toxic stress that must be actively combated to improve health and life outcomes.

The trauma experienced in our communities is profound on a historical level and remains palpable. Trauma and toxic stress produce negative mental and physical health outcomes, poor economic outcomes, and severely limit our educational achievement. The constant micro and macro aggressions faced by communities of color, women, LBGTQ, immigrant, and refugee communities inflict a heavy toll on our psyche and our bodies. Intersectionality and poverty compounds this impact exponentially.

Throughout history our communities have proven to be resilient, but we cannot ignore the need for accessible mental health services and nontraditional mental health approaches that build on the cultural assets embedded in our communities. Culturally effective mental health approaches should aim to strengthen our individual, family, and community resiliency to break the cycles of dependency and counter the oppressive historical narrative that negatively impacts our well-being.

Over the last two decades, Safe Passages has fought to increase the accessibility of mental health services and to innovate new culturally responsive approaches to improving mental health in the communities we serve. In addition to securing resources to strengthen the safety net for vulnerable children, youth, and families, we implement culturally responsive strategies in our Baby Learning Communities Collaborative Program, School Linked Services, and Law and Social Justice initiatives. Most recently, Safe Passages was selected by the California Public Health Department’s Office of Health Equity to participate in the California Reducing Disparities Project. The goal of the project is to address the toxic stress experienced by African American youth and improve their mental health outcomes.

As we continue our pursuit of social justice and actively work toward better outcomes for youth and families in our communities, let us maintain a steady focus on improving mental health practices and accessibility to effective mental health services.